skip to main | skip to sidebar

Mother Mallard's Portable Masterpiece Co., 1970-1973 and LIKE A DUCK TO WATER 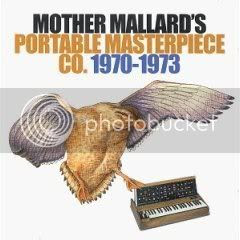 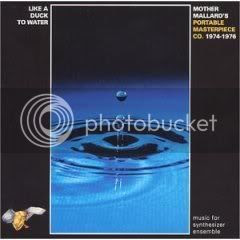 These two releases constitute some of the most important early electronic music. Mother Mallard's Portable Masterpiece Co. was intended to be the first all-synthesizer ensemble. I'm leaving that issue well enough alone, except to say the odds are most certainly in their favor for that claim. The main importance lies in the music presented on these two discs and their desire to bring the sounds of electronic music to the masses. The trio initially consisted of composers David Borden and Steve Drews on Moogs and electric pianist Linda Fisher. Borden was Bob Moog's guinea pig during the development of the Moog synthesizer. All you electronic fans owe this man a huge thank you, for he was an important part of making the synthesizer user-friendly. Three of the tracks on 1970-1973 were originally released as an LP in '73; the remaining two tracks saw the light of day on this reissue. Drews composed two out of the five tracks, the remaining three being Borden's creations (Oddly enough, Mother Mallard was originally intended as a sort of minimalism cover band; however, all their recordings consist of original compositions). The material never displays its age; "Cloudscape For Peggy" and "Easter" could easily be passed off as early Orb or Aphex Twin. "Train" is the only track that clocks in at under twelve minutes (at a mere seven minutes!); "Easter" is a mammoth nineteen minutes and twenty-three seconds. The timeless Moog sounds and intricate compositions are a real eye-opener. "Music" even makes use of a looped vocal sample ("music music music...."), pointing very far forward to much later techno. Despite the limited technology (Moogs were still monophonic back then), these tracks are extraordinarily intricate and warm, with far more humanity behind them than Kraftwerk or Tangerine Dream ever had. Based on the debut salvo alone, Mother Mallard should be worshipped by acolytes of the Cult Of Techno/Drum'n'Bass/Ambient/whatever electronic genre you can imagine. Yes, it's THAT good.
However, the best was just around the corner! Circa 1974, Linda Fisher parted amicably with Borden and Drews, and new electric pianist Judy Borsher stepped in. She is featured on all seven tracks of LIKE A DUCK TO WATER. Drews also takes over the bulk of the credit on this one; he has five compositions to Borden's two. The original LP consisted of Drews' "Oleo Strut" and "Waterwheel" and Borden's massive "C-A-G-E Part II". "Waterwheel" in particular is breathtaking; truly sounding like its title, this is a ten-minute piece of sheer beauty, with cascading ripples of sound and a propulsive bass pulse. "Oleo Strut" is similar, but has its own distinct identity, and is a perfect companion piece to "Waterwheel". "C-A-G-E Part II" (obviously named in tribute to John Cage) is a twenty-minute leviathan, based around the notes/pitches that make up the title. This piece is a great bit of minimalism, ranking with the best of the (unfairly) better-known minimalists' work. The remaining four tracks are very worthwhile as well; Borden's "All Set" and Drews' "Downtown" and "Theme From After The Fall" are great examples of shorter-form minimalism, and Drews' "Harpsichord Truck" makes for a pleasantly lighthearted coda to the album.
On their own, each of these albums is a classic landmark of electronic music. Together they form a whole hidden chapter in electronic music's short history. Don't let the recording dates scare you; there is absolutely nothing primitive about Mother Mallard's sound. I heartily recommend both to fans of any synth-based music, minimalism junkies, ambient connoisseurs, and adherents of the spacier realms of Krautrock/kosmische musik. Cuneiform has the full tracks "Downtown" and "Trains" to preview here, along with several of Borden's post-Mother Mallard releases (which also come highly recommended): http://www.cuneiformrecords.com/bandshtml/borden.html
Postscript: If you're hooked, there is an additional CD released by Arbiter which contains "The Continuing Story Of Counterpoint" parts one and three (including a chorus in addition to the synths) and "C-A-G-E Part III". This also comes highly recommended. Also check out http://www.mothermallard.com .
Posted by Prof. ~.a.~ at 6:50 PM

Prof. ~.a.~
Just graduated (07/12) with a degree in Graphic Design/Digital Media. Obsessed with music since early teenage years. Used to write for Movement Magazine. Mostly interested in pre-90s experimental releases, but I do find a lot of post-90s material that's nothing short of amazing. No download links provided here; there's plenty of places to find them if you absolutely must, but please consider supporting the artists when possible. I do this just to spread my opinions of the music I love to others, and hopefully get a few people hooked on said music as well. I'm always up for album suggestions as well, so please contact me if you have any!

Other blogs I enjoy

More Fun Links (Mostly Music-Related, And Some Are Just Fun/Funny/Bizarre)